CONSTITUTIONAL JUDGMENT ESTABLISHING THE INAPPLICABILITY OF LABOR IMMOBILITY AND SUBSISTENCE FOR THE PROVISION OF SUBSIDIES, IN FAVOR OF THE CHILD OR GIRL UNTIL YOU HAVE ONE YEAR OF AGE.

¨dissolved the labor bond and bearing in mind that the employer of the public or private sector is compelled or forced to continue providing benefits when being pregnant or, the child until he reaches one year of age¨ which means:

Obstetric care for the mother during pregnancy, childbirth and the puerperium until the newborn reaches one year of age

and the provision of subsidies:

-Prenatal, consisting of the delivery to the pregnant mother, of a monthly payment, in money or kind, equivalent to a national minimum wage from the fifth month of pregnancy and ends on the last day of the month the child is born;

– and Breastfeeding, consisting in the delivery to the mother of dairy products equivalent to a national minimum wage, until the child reaches one year of age.

Benefits, which – reiterating – should be covered by the employer even when there is no longer the employment relationship arising from a specific dismissal in due process. 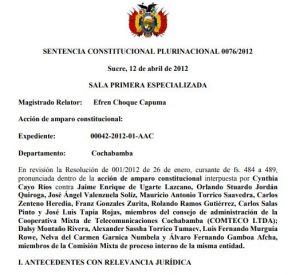